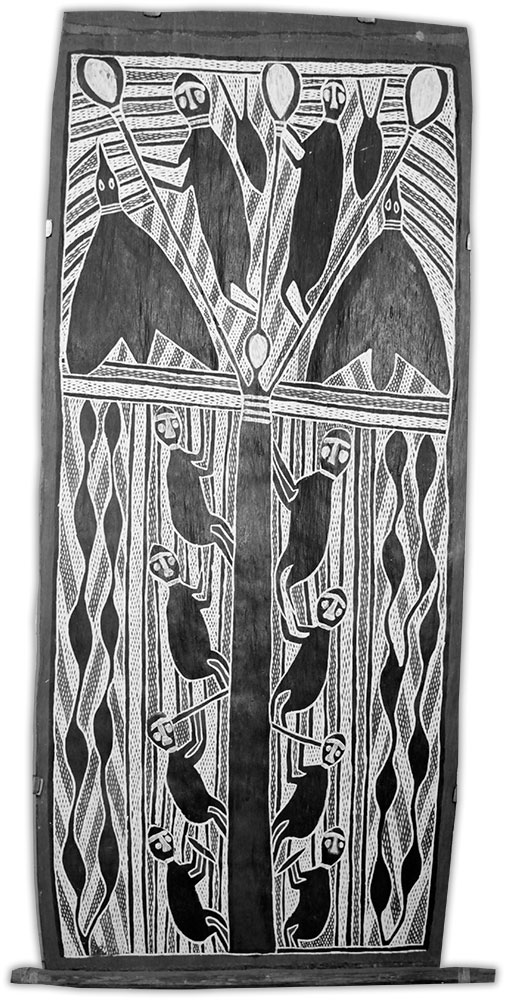 Here I am at Yirrkala, I’m staying here at the moment, I lived and grew up here. When I was a little boy growing up, many years ago. When growing up I learnt about manikay (songs), and also stories, and I’ve learnt Dreamtime stories. Guess what? I lived in the foundations of the Elders, my grandfather, my great grandfather, with my father in those days.’ The story that I am to tell is about the painting. This is Djapu painting. The story that I am going to tell is about Djapu.

This painting that you see, is about the form of the water’s designs, called Baḻamumu. Baḻamumu means the forms of the water right,’ and this is its designs, the story is about the land where he, that person lived, who we called mokuy Ŋaṉuk (an Ancestral Being) for this land that lies along here right,’ the image of it. The image of bones which stretches out is called Guywuḻun, Maypurrumburr, Yiḏirrwa, Ŋulpinditj, this image of bones that lays, which you can see.

And the image of it that you see is the two butterflies, tells that people are coming ok,’ is what they call them Ŋaṉuk’ (Ancestral Being), for instance are called Ŋaṉuk (Ancestral Being). Not the dead, but just the ways of laws or the rules that are mentioned.
And again the other huge thing for him, is over at Yalpilila, the penis of them two,’ hanging down, the flowers from the flowers of those ones tied up, from over the Dhaŋdhaŋ (branch, flowered ends), and from the middle of the Dhaŋdhaŋ and top of that Dhaŋdhaŋ there.

Them ones there, they are Mokuy (Ancestral Being) these here, Mokuy (Ancestral Being) the head master’s call Manyguluma, and the other one is Garrarrtjuna. Clap sticks holders are called Goŋ biḻma, which they use clap sticks all the time right.’ Them, these two usually sing songs ok’ and they also create song lines, these are the stories that I’ve heard in the past.
The didgeridoo player, and again these are the dancers, and there you will see, yes’ so those are the two Dhaŋdhaŋ (flowered ends) at both sides, we call that Marayaya, they are Dhaŋdhaŋ (flowered ends).
From this ŋarakawuy (morning star pole), and on both sides of it, have feathers at the ends, the feathered ends are called Guḏalpa. The other name of it is Garrarra, which have the feathers of spoon bells. They are also made out of different bird’s feathers, which are seagull feathers. So, here you can see it used, like the ones you see with your eyes, is like a waterhole. No, those are the feathers, and again over there, the Dhaŋdhaŋ (flowers) have to be separated, and over there at the edge of it, where the Ŋaṉuk (Ancestral Being) holds all the feathers, and butterflies and butterflies.

And also the two dilly bags were both hanging, they were called Gayarrmula, Yalpilila for this Baṉumbirr (Morning Star) feathers that were all collected into the dilly bags. Far beyond a child cried, a new child for this Baṉumbirr (Morning Star), the mother used to take it out from that dilly bag. Out from gayirrmula (the dilly bag) and it was shown out just to stop him/she (baby from crying) ok.’ Then it was taken back in, and then again the child would cry, human child, mokuy (ancestral being), this is Dhanbul Wulthulaŋiny, Yiŋgiyiŋgi and this is it for us Djapu clan group. The place was created Nhurrnhurrwuy, Larritjpa also Makuluŋgul he created and Nhurrnhurr is what the place is called now for this story. This story is from Maw, because he knows the story.

And now this the designs, it has been painted, yesterday when I asked the school for their advise. The food’s over here that you’ll see over this side here ok,’ this side and that side those are yokaḏa (trifolia), those kind marrnhamarrnha (trifolia) food that is. At Bukuḏal, this is where it managed to spread itself to grow. This actual food marrnhamarrnha (trifolia), is the food for this mokuy (ancestral being).
This marrnhamarrnha (trifolia) that you see, for the ancestral being, but the two Gurrnyinu at the end of it, they are the ones that take care of it all. That had been made long time ago, where can it be today.’ This place, where maybe Yawulŋura traveled from here Wunyunymarra long ago and found group of Dhanbul people, at a place Burralku, and the name of the place is Burralkuwuy, so we don’t see this place Burralkuwuy. And these are munbi (fire vines) that lay along right here,’ this is our way and that is from the land that you are looking at, it has strips this munbi (fire vines) food, its like that ok,’ this is that Dhaŋdhaŋ called Yawiṯan. And this is the only ŋarakawuy (morning star pole), from this ŋarakawuy (morning star pole) and now here you can see the designs of the painting, which I’ve already told you about. This is the foam of the water, seawater, it murryun (roared) rinydjimurryun, galwartjgalwartjthun (made the roaring sounds), of the wuḻamba (Dhuwa sea water) is the name Mirikindi, Nakugaṯu, so these are the names, of the seawaters inside.
So that you can learn and know, it is for our children, for our Djapu children, that you will see this is our story.
The story is for you that we are going to die and when we die ok, and you will ask the school for the your support, for your child, and for your grandchildren these stories. The story is from here Nhurrnhurrwuy, when the mokuy (ancestral being) located those mob Dhanbul Wulthulaŋinydja and Yiŋgyiŋgi people. And that’s the only one ŋaraka they manage to make and with the food yokaḏa (trifolia) and rakay (mud chestnuts)

They eat these sorts of food and yokaḏa is one of them. For this food, if you don’t want to use them, my aunty’s name and marrnhamarrnha (trifolia) is its other name. This is the name that you will write down in the book. These are the two butterflies ok,’ sitting down are two berrkŋu (praying mantis) these ones right,’ that moves its hands looks and stretches their arms, when they sit.

They are two Berrkŋu (praying mantis), and the others are these butterflies which fly around, but he didn’t draw them on this paper, what other pictures didn’t he put yesterday? So the painting that they did is not from a book, but it’s comes out from their minds. These are the stories for your school. So you will think about it and see with surprise the things done in the past and how they lived, and think that it ‘s true like this. In case that you won’t believe any of this, that’s why we tell you the stories and the paintings. So that you will think about this yourselves,’ that is real that I was told, and here it will go on the back cover of the book right. So this is done, yes I left one more, the speeches about someone, I’m going to tell you one more thing, this one ok,’ when you see Dhaŋdhaŋ (flowered ends), that is called Wuypa, Wuypa from Djurruŋunuŋun Galalarr that’s that, and it shows how we use Wuypa, and how we paint ourselves when people dance. So these are the Wuypas that are there connected to two Dhaŋdhaŋs (flowered ends) on both sides stretching out their arms. That’s the one that past on beyond, that holds onto all the Dhaŋdhaŋ (flowered ends). And that one there right,’ it came back and this is it, that’s it.